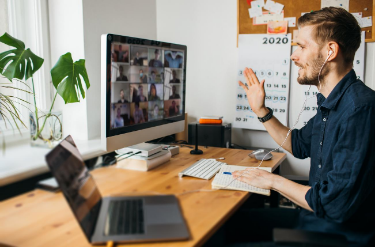 Delta Data’s fifth annual industry roundtable, our first large scale virtual event, brought together an assemblage of over 60 asset managers including five of the top 10 largest mutual funds complexes in the United States for a candid conversation on the current state of mutual fund management and operations in the context of the global pandemic. The main areas of focus included regulations and compliance, oversight management, and coping with the sudden imposition of a Work from Home (WFH) scenario and the drastic increase in the number of associates that make up the remote workforce. Both the Investment Company Institute (ICI) and the Depository Trust and Clearing Corporation (DTCC) attended the event.

The evergreen topic of Intermediary Oversight generated a lot of activity during the event, with multiple participants asking what’s new and different this year. Attendees related stories of increased document reviews, transparency, and more focused contact with the intermediaries; reporting that the intermediaries have received this approach well. An attendee from one of the top five Investment Managers in the U.S. indicated that the board of directors has become more engaged in intermediary oversight, and this sentiment was shared by several other participants.

The topic of system evolution generated a good deal of interest, indicating that work methods have been changed to adapt to decentralized working conditions. This means that reviewing firm activity and document control, including the onboarding and termination of intermediaries, is receiving more attention and tighter scrutiny. In general, companies reported paying more attention to dealers, specifically smaller ones, and checking on status and FINRA disclosures. Banks reported looking at COVID response plans, and most participants felt that the industry has done well as a whole in responding to the pandemic.

The group discussed the challenges of models, with intermediaries running their own discretionary models, and what that implies. Comments were made on transaction activity monitoring for omnibus players and carve-outs for programs. It was not always evident how to align which transparency data received with sales information activity that qualifies for this, which may lead to challenges. The group collectively agreed and felt it was necessary to look for success in identifying the data, as well as finding the right intermediary contact to discuss transparency models, which remains a challenge.

Communication on model changes also poses an issue. Many participants are interested in access to data and know that the information they manage is monetizable because proprietary models are in demand. As models become more prevalent their value increases, and there have to be cautionary measures taken to limit access to this data.

One question that emerged several times, in various iterations, concerned the end of the era of in-person meetings, with several predictions that the future may hold a mix of virtual and personal visits, citing that virtual presentations represented a small percentage of interactions last year. Many companies have stepped up the cadence of virtual visits for relationship purposes, more so than due diligence, with a strong move towards adoption of industrywide standards for virtual back office visits. Participants felt a need to bring more creativity to these visits, finding a limitation on sessions lasting more than an hour. An example was brought up by citing the sharing of third-party audit docs in a tightly tailored session with a deep dive on a specific subject.

John Randall, Director of Operations and Distribution at the Investment Company Institute (ICI) addressed the FICA framework – adjusted to AICPA standards changes, indicating that there were not a lot of material changes. From a preview perspective, he offered that there would still be a focus on clarifying third-party servicer organization audit documents and processes. Randall sampled the group pursuant to the audit changes in early 2019. In general, participants felt that it was a non-event and that they had been awaiting it. Some expressed interest in entity controls and whether that would allow for usage by asset managers and other dealers.

Finally, the group addressed ETFs and acknowledged that many companies were just getting into the market. The group felt that many intermediaries don’t want to see ETFs that are just a clone of mutual funds, and are looking for a product that is similar, but different. One approach posed involved looking at what a “clone” actually means, with intermediaries having a different definition than the funds.

For your entertainment, view our official conference cocktail here: