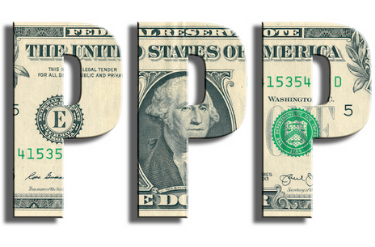 Many small business owners wading through the application form for the Paycheck Protection Program (PPP) are finding shallow waters when they’re digging for any fine print to explain whether or not they qualify, and what with, and for how much. My real-world engagement with the process, as a CPA with 41 years of experience, finds that the forms come up confusingly short on guidance for partnerships, LLCs, and Schedule C self-employed individuals. They are effectively shorted by what is in reality an incomplete and non-expansive application. What I learned going through the process may help you if you’re filing under one of these statuses.

Here’s one thing to note: banks will only give you a loan if you have a checking account, and a good relationship with your banker helps. Honestly, if you don’t have a business checking account, are you really a business anyway? The program is designed to keep businesses in business because they do things like pay taxes – which keeps the government running, closing the loop on a holistic financial system. If you haven’t been playing in that sandbox, don’t expect a free ride now.

I have two children that each have their own small business. Both are LLC partnerships, and each has W-2 employees. They, however, do not take out W-2 wages but rather take draws and then report their guaranteed draws and any net profit/loss as shown on their K-1 form. There is no reference on the PPP application form to adding partner guaranteed draws to the average compensation costs. After reviewing the forms, I advised my offspring not to include their draws as it appeared, they might have to file separately for that amount as self-employed individuals. It turns out that it was bad advice.

After filing for their loans based only on W-2 wages, the SBA issues their Interim Final Rule that clarified that partners were not considered self-employed and could not file separately and should include their draws in with W-2 wages to calculate their loan amount. The real-world results of the last-minute publishing of the Interim Final Rule: One child got funded the day the interim rule came out, less their draws, the other child had not been funded, and was able to change their loan request to include their draws. But sadly, government backed funding ran out before that loan was funded.

A third example involves my sister, a highly respected and sought-after stenographer in the Washington, DC area who files a Schedule C to report her income. The Interim final rule clearly states that you should base your loan request on the net income reported on line 31 on Schedule C. My sister had purchased a new steno machine in 2019 for 5,300 and was going to write it all off per the tax regs, reducing her income by 5,300. I did some calculations as to whether she should write it all off and save the self-employment and income taxes or depreciate it and get a more considerable PPP loan amount. This opened another can of worms.

A problem arose because the CARES act states that the loan request is to be based on “payroll costs,” which does not exactly correlate with net earnings from self-employment, due to the ability to write off capital expenditures in one year. Add in the fact self-employed individuals pay both the normal withheld FICA as well as the matching portion an employer would usually pay, and the problem is compounded. Why not include that matching portion of FICA in payroll costs like other employers get to do? Self-employed individuals who file a Schedule C were not allowed to submit a loan request until April 10, whereas every other small business could apply April 3. But by April 16, the money had run out, so she has no PPP loan.

And finally, there is the issue with the SBA’s Economic Injury Disaster Loan or EIDL. Similar to the PPP loans, this was an advance by the SBA of $1,000 per employee, up to a $10,000 max, to a small business, and it did not have to be repaid. These loans were supposed to be able to provide funds to a small business within three days of a successful application. My sister and one child applied for the EIDL loan, but to date, have not received funding. The SBA recently announced that it also had run out of funding for these loans. There was considerable confusion as to whether to reduce the PPP loan request by any EIDL loan requests or to get the full PPP loan and then if the EIDL loan came through to have the bank reduce the PPP loan by the EIDL loan or use part of the PPP loan to pay off the EIDL loan or … well, you get the point.

Here is my issue. Do the rule writers in congress (or the SBA) not include subject matter experts on things like tax law? Wouldn’t this be an essential addition to the equation? It was immediately evident to me that the loan application form made no provision for draws in partnership LLCs. And self-employed Schedule C net income is way too restrictive based on just a couple of reasons cited above.

I know everyone was in a hurry to get this loan provision passed. Still, a cursory understanding of the tax laws and tax forms would have eliminated a lot of unnecessary mistakes and would have put all small businesses on the same level playing field. We can only hope that the next tranche of money is accompanied by a revised application that embraces the real-world experience of being self-employed.