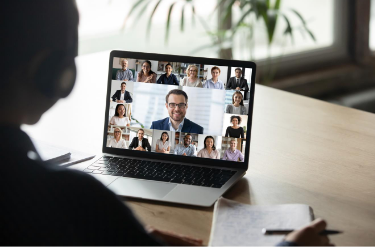 Work from Home and the Changing Perception of Wall Street

In our last post, we shared highlights from our annual 2020 roundtable. Make sure to check that out if you missed it. The final discussion involved business process execution in the age of dislocation and focused specifically on the current work from home scenario. Delta Data presented information from a survey conducted during the roundtable, finding that no one expected to return to the office before September.  Some of the unexpected issues discussed were the build-up of PTO, extending PTO buybacks to employees and 50% indicated that they are currently hiring. What attendees all agreed was a larger struggle involves the changed perception of working on Wall Street as the gold standard for occupations. The top talent may no longer be attracted to Wall Street, as the next generation entering the talent pool has embraced the gig economy model of working. This disruption may be an opportunity for a global reset for the practices of the large firms represented on the call around the perception of working in the financial sector, as the industry, in general, wasn’t changing at the pace of other industries.

A recent Ignites article citing one of the firms that also participated in this round table realized a 174% increase in industry productivity was discussed, with participants feeling that this was due as much to decreased travel schedules as people being more productive because they don’t have to leave home. The concept of actually measuring productivity was discussed, focusing on the fact that many firms had already been set up for remote work, through the industry establishment of VPN’s. Some firms reported that productivity has gone up somewhat, including scope creep on work, encroaching on work/life balance. The social aspect of office life was discussed, with participants speculating if the virtual scenario will balance out with people who were working from home versus people who worked from the office.  Several firms highlighted virtual happy hours, team get-togethers and other non-specific work topic time together were helping.  All stated the approach, activities supported and direction continues to evolve with the pandemic.

At least 80% of the larger firms participating in the conversation already had remote workers in place, however, the current situation posed unique challenges, embracing activities surrounding call center personnel and mail pickup. Firms with an older shareholder base, who have not converted to electronic transmissions, still manage their relationships with snail mail. Several firms discussed deferring full redeployment plans until 2021 because of virus transmissions threats posed by close-quarters contact in common areas.

Several firms reported stresses in working with third parties, intermediaries, or service providers. No matter how well prepared a company may be for changed working situations, no one operates in a vacuum. There is now more reliance on email, and not every firm was equally positioned for the complete personnel WFH scenario.  Coordinating communications and project management were cited as issues: should projects be delayed or put off?

It was reported that the ICI reached out to provide relief on some requirements and exemptions, with several firms taking advantage of the opportunity. Some companies moved to virtual sales presentations and had to reinvent how this was done, learning how to chat and communicate during presentations.

All companies reported working on developing stay at home models and what this looks like. One big question emerged: what happens when auditors and regulators start looking into privacy/security issues in the WFH scenario?

Some senior members of firms who had not been supportive of the WFH scenario have now changed their perspectives, by necessity, however, would this change hold when the pandemic fades? The industry as a whole has been forced to take a hard look at its collective corporate culture, and this is never an easy thing to do, especially when maintaining a balance between the demands of labor and adhesion to mandates from authorities and regulators.

Some firms report developing training sessions to manage activities like setting up a home environment and received involvement from senior managers, who don’t usually engage in these types of activities. Social tensions, hard to miss in any current news cycle, have added to anxieties, and are being addressed in corporate town halls. Many felt that while the entire financial industry has been dogged with the perception of being as hard-nosed and insensitive, the industry as a whole is making a concerted effort to address social issues. Many individuals on the call felt that their companies were stepping up their support of employees in light of the pandemic and the dynamic social changes shaking up the world.

Following nearly three hours of lively discussions, the group collectively relaxed and with a Zoom cocktail party and continued their various conversations for another hour.

If you missed our roundtable and would like to hear more about what was discussed, don’t hesitate to get in touch.

For your entertainment, view our official conference cocktail here: